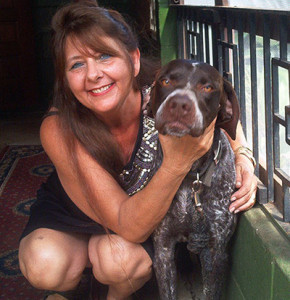 Our dog was lost and I called my friend Ruby in Hawaii for psychic help to find him. She in turn called Susan, her friend, and described our 200lb English Mastiff to her. I got a call back from Ruby about 20 minutes later repeating to me what Susan had said. Susan said Monty, our dog, was about a mile from home, at a 2 story home with a white front with a black iron stairway off to the left of the door. With this information, my sister went out in search of Monty and spoke with many people. After searching for 2 hours, she decided to go home. Right then she drove by these 2 story white condos about a mile from the house… all of them were white with black iron railing outside. At one of them a lady was in the front yard, my sister asked about the dog and the lady said she hadn’t seen him. My sister asked if she could leave her number just in case she did, because a psychic described her house when we called today trying to find the dog. The lady took our number, but obviously thought my sister was a nut-job. This lady was the only person my sister gave our phone number to out of the many she spoke to.

About 5 hours later at 10:30pm, the lady the my sister gave the number to called. She said she was in her kitchen telling her son about this crazy woman who came by today and gave her number to her, asking her to call if she saw the dog because a psychic had described the house. Just then she looked out into the front yard and saw our dog Monty running around with her cockerspaniel insider her closed iron fence yard. We went up to her house… and it was Monty. It was 108 degrees outside, and he was exhausted. We don’t know how he even got into the enclosed yard.

The lady was beside herself with amazement, before this day she didn’t even believe in psychics. We are so grateful to Susan for finding him.